When a major football tournment like the World Cup is happening, everybody (men, women and children) love to talk about it. So, if you want to have a good conversation in English when this is happening, you need to know and use the English vocabulary connected to this competition. 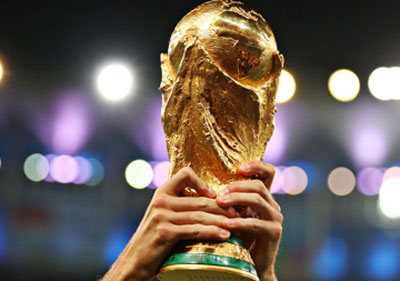 In this online exercise on 'football/soccer vocabulary' you'll learn and remember the English vocabulary used for the football World Cup and what it means. The exercise explains what happens in the World Cup and what the names of the different parts of it are. Knowing this vocabulary is essential if you want to talk to somebody in English about the competition.

This vocabulary can also be used to talk about other football competitions/tournaments (like the European Cup, the Champions League etc...).

This exercise doesn't look at general English football vocabulary (e.g. the names of the players, what happens in a football game etc...). To see this vocabulary, do the below online exercises:

Exercise: What happens in the World Cup

In the following conversation between Buck and Juan, Juan explains to Buck what happens in the football World Cup (they are talking about the 2014 World Cup in Brazil).

From the context, try to guess what the meaning of the words/phrases in bold are. Then do the quiz at the end to check if you are right.

Buck:'Are you going to be watching the World Cup this year?'

Juan:'Of course I am. My team Spain is playing in it. Hasn't your team qualified for the World Cup as well?'

Buck:'Yes, the United States is playing. But I don't expect us to win any games, we are not a very good team. In the last game, we played against England and we lost by 5 goals.'

Juan:'I remember, the final score was England 5 the United States 0. Buck, we don't normally say game in football, we normally call it a match.'

Buck:'I'm American, so I don't know a lot about soccer. That's what we call football in America. So what happens in a World Cup?'

Juan:'It's a tournament where 32 national teams try to win the actual World Cup, the trophy.'

Buck:'So how do they do that?'

Juan:'Teams play matches against each other in different rounds. In the first round, which is called the group stage, each team plays in a group with three other teams. For example, in the group that England is in, there are also Uruguay, Italy and Costa Rica. And each of these teams plays one match against each other.'

Buck:'OK, so how many teams go through or progress to the next round after the group stage ends?'

Buck:'What do teams get points for?'

Juan:'In the group stages, you get 3 points for winning a match, 1 point for drawing and 0 points for losing.'

Buck:'So what happens if the teams that finish second and third in the group have the same points. Which team goes through to the next round?'

Buck:'I've heard people call all the rounds after the group stage, the knockout stages.'

Buck:'So after 'the last 16', teams go through to the next round that is called the quarter-finals I suppose?'

Buck:'I know that in these knockout stages/rounds each team only plays one match. But what happens if they draw at the end of the match? The final score is 0 - 0 or 2 - 2.'

Juan:'In the knockout stages, they have to continue playing the match until one of the teams wins. If after full time (90 minutes) it is a draw, they then play another 30 minutes. This is called extra time. If it is still a draw after extra time, they then go to penalties, where 5 players of each team each have to take a penalty. The team which has scored the most penalties at the end wins the match.'

Well done for reading the text and learning the meaning of each of the words/phrase in bold. If you don't want to forgot what they mean and want to be able to say them correctly, I'd like you to do one more thing which won't take you long.

Answer the questions in the below quiz with the World Cup vocabulary you've just learnt. Doing this will make sure that you both remember what they mean and that you'll use them in the future.

Below is a definition/description of each of the words in bold from the above text. Now choose the word/phrase from the question's selection box which you believe answers each question. Only use one word/phrase once. Click on the "Check Answers" button at the bottom of the quiz to check your answers.

When the answer is correct, two icons will appear next to the question. The first is an Additional Information Icon "

". Click on this for extra information on the word/phrase and for a translation. The second is a Pronunciation Icon "

Now that you understand the new vocabulary, practise it by creating your own sentences with the new words/phrases.

This is me, Chris Clayton, the owner and main writer for Blair English. I'm also a part-time English teacher in sunny Spain. I have a love of history and the web. I hope you find the website useful.